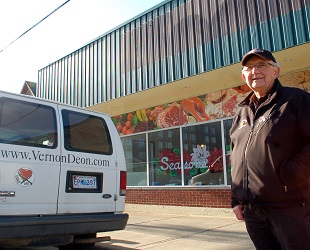 Continued.. In the fall of 1980 there was pressure to replace all wooden lobster plugs with rubber bands. Which are used today. It was then Vernon made the decision to diversify into fishing supplies as soon as possible or be out of a job because of this switch. In the summer of 1981 Vernon began selling long line ropes and from there the rest is history. Over the next 30 years, the company expanded to 8 fishing supply stores. He had 5 delivery trucks and employed over 40 people and shipped products worldwide. In the fall of 2013, Vernon sold the entire fishing supply company to a father and son from Shippagan, New Brunswick. The company has since been renamed to Vernon d’Eon Fishing Supplies Ltd.

"In the summer of 1981 Vernon began selling long line ropes and from there the rest is history. Over the next 30 years, the company expanded to 8 fishing supply stores." 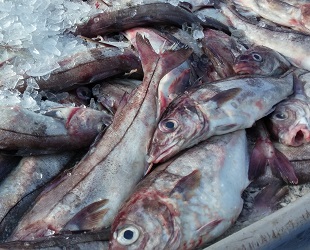 Haddock-Melanogrammus aeglefinus... Haddock and cod are both members of the family Gadidae. Before the advent of refrigeration, cod was preferred due to it's suitability for salting. Presently, fresh and frozen haddock have now become the consumer's number one choice, presenting a more delicate, slightly sweeter flavour. Haddock are a bottom dwelling species, which is caught on both sides of the North Atlantic. It is smaller than cod and can be distinguished by a dark lateral line and a black spot behind the gills, known as the "Devil's Thumbprint". Average length and weight is 50 - 60cm. and 1 - 2.5 kg. respectively. The meat provides excellent nutrition, low in fat and is an good source of sodium and potassium. Cooking is restricted only to one's imagination, the most popular North American presentation being battered fish and chips. Smoked haddock is also a very popular and has been made famous as Finnan Haddie.

"Haddock is a very important species of fish to the area for food and our local economy." 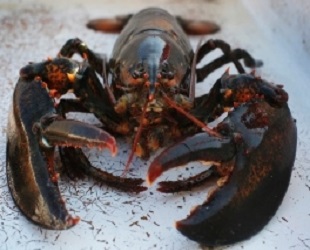 Atlantic Lobster-Homarus americanus... This species is commonly known as the Atlantic lobster, and are also known as Northern and American lobster. Worldwide, they are often referred as the "King of Seafood" and are definitely the pride of Atlantic Canada. They are fished in the cold, pristine North Atlantic waters off Canada and the U.S., both in shallow inshore areas and deeper offshore waters. Lobsters belong to a group of animals called Arthropods having a hard shell and jointed appendages. The Atlantic lobster has five pairs of legs, one set being large claws. Edible meat from both claws is delicately textured and succulently flavored, truly a one of a kind taste experience. The body, tail, legs and claws are all hard-shelled. Live lobsters range in color from greenish-brown to dark brownish-rust. When cooked, they turn bright red. The resulting white meat is pleasantly firm and dense, rich in taste and succulent in flavor. Most certainly, "fit for a king."

" The resulting white meat is pleasantly firm and dense, rich in taste and succulent in flavor. Most certainly, "fit for a king."

The Nova Scotia Lobster is the species that sustains the economy in the area. The conservation measures keep the lucrative economy available for generations to come.. 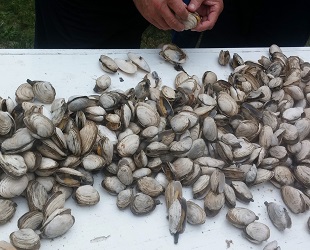 Softshell Clams-Mya arenaria... Soft-shell clams (Mya arenaria), also known as steamer clams, gapers and squirt clams, are filter feeders, residing in the substrate of bays and estuaries throughout Nova Scotia. Their shells are white or dark blue in colour, depending on the type of substrate they inhabit. White-shelled clams are associated with coarse sand with less organic material, while darker shells are found in fine silt with higher organic material. This anomaly does not affect the quality or taste of the clams. Individual clams can grow to a size of 100 mm., the average, approximately 65 - 70 mm. The minimum legal size limit in Nova Scotia is 38 mm. Clams are harvested by hand using a clam hoe. Fishermen follow the receding tide and dig up to four hours before the tide returns. Typically, clams are sold live in the shell or shucked and processed as meats. 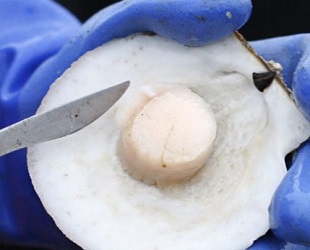 Atlantic Canada Sea Scallop... Sea or Giant Scallops are bivalve molluscs and are one of Canada’s most important commercial shellfish species. The scallop is possibly best known for its beautiful and distinctive circular-shaped shell that can reach up to 20 cm in size. This fishery is managed in six geographical zones called Scallop Fishing Areas, which range from the St. Pierre Bank off the south coast of Newfoundland to Georges Bank off the southern coast of Nova Scotia. Primary export markets for Sea Scallops are the United States and France. The Eastern Canada Sea Scallop (offshore) populations are healthy and sustainably managed. Current biomass levels are above their long-term medians and annual fishing quotas are in line with science advice to maintain the future health of the population. Sea scallops are found densely concentrated on sandy, gravel bottoms. Sea scallops can be found in waters at depths as shallow as 10 metres and as deep as 384 metres. The harvestable offshore concentrations are found on banks at depths between 35 metres to 120 metres. On average, sea scallops need four to five years to reach commercial size. Sea scallops can live up to 21 years. Sea scallops are suspension filter feeders and their diet consists mainly of plankton. Before settling on the seabed, scallop mortality is high as scallop larvae may be eaten by larger organisms, including zooplankton and fish, or transported away from favourable habitats by currents. The main predators of adult sea scallops are sea stars, crabs, lobster and various groundfish.

Some of our local fishermen go scallop fishing as their livelihood 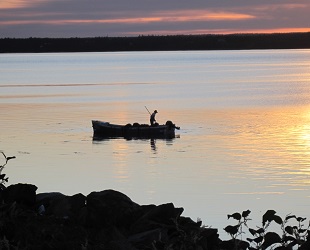 Rockweed-Ascophyllum nodosum...Rockweed is a large, common brown alga (Phaeophyceae) in the family Fucaceae, being the only species in the genus Ascophyllum. It is seaweed of the northern Atlantic Ocean, also known as rockweed, Norwegian kelp, knotted kelp, knotted wrack or egg wrack. Ascophyllum nodosum has long fronds with large egg-shaped air-bladders set in series at regular intervals in the fronds and not stalked. The fronds can reach 2 m in length and are attached by a holdfast to rocks and boulders. The fronds are olive-brown in color and somewhat compressed but without a mid-rib.It is harvested by a few local in the summer in and around Pubnico Harbour. The rockweed is sold and processed as fertilizers and for food and additives in food.

"It is harvested by a few local in the summer in and around Pubnico Harbour..." 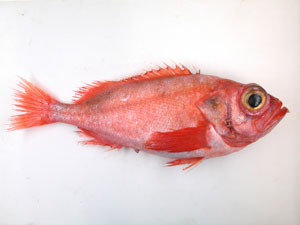 Redfish Redfish, members of the scorpion fish family, are found in the north Atlantic Ocean. Redfish comprise two major species, Sebastes marinus and Sebastes mentella, the latter of which is further subdivided into two species (S. mentella and S. fasciatus). Generally speaking, all of these fish are treated as one and the same by everyone outside of the scientific community-they are virtually impossible to tell apart. In the western Atlantic, redfish range from Baffin Island to New Jersey, living in rocky areas at depths of up to 700 metres (S. mentella is usually found in shallower water than S. marinus, however). Also called ocean perch, even though it isn't a perch at all, redfish have a short body with a large head and wide, gaping mouth. They have a row of short dorsal spines followed by a flat dorsal fin and a small tail with a shallow indent. Adults range in colour from bright orange (S. marinus) to bright red (S. mentella). S. marinus grow to a maximum length of about 70 centimetres, while S. mentella grow to about 60 centimetres. Much as the age of a tree is calculated by counting the rings in its trunk, the age of a redfish is determined by counting the rings on the otoliths (small bones in the fish's middle ear). They often live to be 40 years old.

"Redfish have a short body with a large head and wide, gaping mouth..."

Redfish are also an important species for our community for its flesh and also the cutting are use for lobster bait. 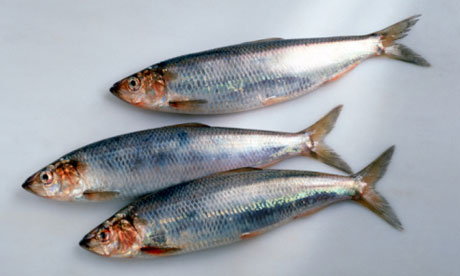 Atlantic herring are one of the most abundant fish species on earth, living in the open ocean and gathering in large schools. The species migrate for feeding, spawning, and over-wintering purposes and are found on both sides of the Atlantic.Herring are fished for both food and bait, and the catch may be exported smoked, fresh, frozen, marinated/pickled/cured, and canned as “sardines” or for their roe. Products from Canada’s herring fishery are destined for markets in Japan, the United States, and the Dominican Republic. One of the most valuable herring products is roe for the Japanese market. Herring are small silvery fish which feed primarily on phytoplankton, zooplankton, and small fish and larvae. The species swim with their mouths open to filter the plankton as they move through the water. Adults stay in the deeper waters during the day and come to the surface to feed at night.

"Canada’s Atlantic herring fishery is commercially important in the areas where the main fisheries are located: off southwest Nova Scotia and the Bay of Fundy"